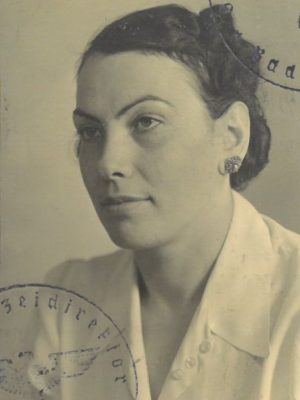 At my mother's house

Thanks to Mr. Gunter Demnig and all the volunteers who have made it possible for my mother, her brother and my grandparents to finally come home again where their lives as they knew it were abruptly taken away from them. Their large department store was taken as well as their home, money and their citizenship. My Ludwig (my grandfather) escaped while on a buying trip for the store, right at the time they were arresting the jewish men. My mother and her very young brother were put onto the last Kindertransport train with soldiers and guns and were taken in by strangers upon their arrival in England. My grandmother Sima (Sylvia) hid in Berlin waiting for a passport as she was Romanian, not German.

It would be two years before she would see her children again. After finally making it to America, with no financial means of support, except for a distant cousin, Ludwig (my grandfather) took jobs playing the piano, working in a book store and Sima (Sylvia) worked hand sewing clothes. The family never spoke German, practiced their religion or talked about the horrors again. My mother used to tell me, if it's not happy, I don't want to hear about it. My mother was a very outgoing and happy person, but she kept so much inside and refused to talk about what was bothering her. I'm sorry she was never quite able to remove the horrible memories she was carrying. May the soles of these beautiful people rest in peace."