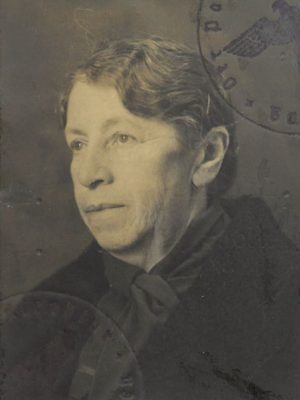 Dora Hecht was born Dec. 19 1875 in Lobenstein/ Reuss. She was the daughter of Georg Hecht and Therese Hecht (Nee Loewel) who had married on September 2, 1873. Dora was the middle child, her brother Hugo had been born in 1874 and her sister Marta four years later in 1878.

There is no record of Dora ever marrying. In 1904, her sister Marta married Leo Rosenfeld, a cousin, in Ansbach. In that same year all three, Dora, her sister and brother-in-law, moved to Nuerenberg. In 1905, Dora Hecht's nephew Rudolph was born. Her brother-in-law and cousin Leo Rosenfeld owned a printing enterprise and worked as the editor of the Israelisches Gemeindeblatt. In January 1934, Leopold's printing business was Aryanized. Two months later, Leo, Marta, and Dora moved to Baden-Baden where they lived at Markgrafenstrasse 24.

While living alone in Baden, she did at times receive financial assistance from Arnold Hatch, a cousin who lived in New York. The last money he wired her was frozen by the Nazis and remained in a Baden bank account.

On October 20, 1904 Dora Hecht was deported to the Gurs Internment Camp in Vichy France. She lived at Gurs until her death, due to a heart condition, on September 3, 1941. Ms. Hecht, according to camp correspondence, left behind a "thoroughly damaged suitcase", a few blouses, and some stationary. Ms. Hecht was buried at Gurs.